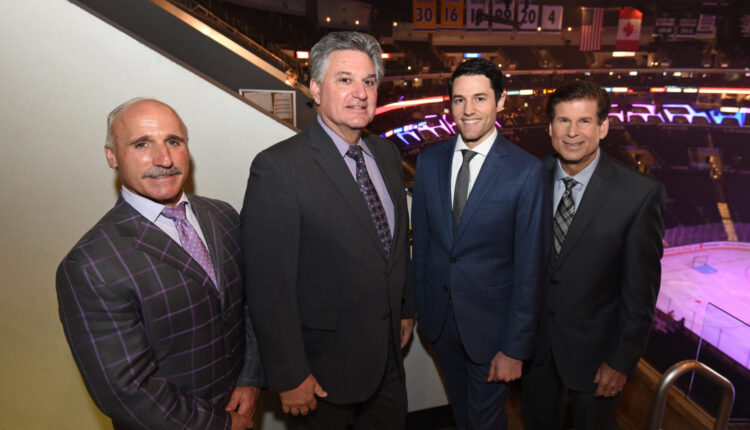 As announced earlier today in a joint release, the LA Kings have a complete 2022-23 broadcast schedule, including a slate of 73 regular-season games to be broadcast via Bally Sports West. Combined with the already released national schedule, all 82 LA Kings regular-season games this season will be televised locally for Kings fans to take in. Additionally, the team announced that all 82 games will be streamed, as always, via iHeartRadio on the LA Kings iHeartRadio Network, in addition to a package of select home games on Tu Liga Radio in Spanish.

As announced earlier this month, the Kings will be featured via a national broadcast nine times this season, with games on ESPN, ESPN+ and TNT, beginning with Opening Night, which will be a part of ESPN’s season-opening doubleheader on Tuesday, October 11.

The full, 82-game broadcast schedule is available below –

The Kings broadcast crew will be unchanged this season, with the duo of Alex Faust and Jim Fox back together on television and the team of Nick Nickson and Daryl Evans together on radio. For the games on Tu Liga, the team of Francisco X. Rivera and Nano Cortés resume their roles calling select home games in Spanish.

Joining Faust and Fox as a part of the television broadcast will be Patrick O’Neal, who returns as the host of LA Kings Live, sitting alongside former Kings players Jarret Stoll and Derek Armstrong. Additionally, Carrlyn Bathe is back for her fifth season to deliver interviews, reports and social media updates surrounding home and road telecasts. From the Bally Sports West production center, Steven “Hoover” Dorfman will begin his 14th season on Kings telecasts, serving as the producer, and Mike Hassan will again direct the telecasts, a position he has held since 1995.

On the radio side, Jesse Cohen hosts a pregame call-in show prior to select Kings games, including all games broadcast at home. The pregame show will begin in the preseason on October 2nd versus Anaheim. Additionally, yours truly will contribute with a first intermissions segment alongside Nickson, both at home and on the road.

From the official release –

The Kings today also announced all Kings preseason, regular season and postseason contests will again be streamed live on the LA Kings iHeartRadio Audio Network, a custom station available on iHeartRadio, and select home games will be broadcast in Spanish on KWKW 1330 AM Tu Liga Radio for another season.

All 82 Kings regular season games will be broadcast this season locally or on national television with regular season game coverage of LA Kings Hockey on Bally Sports West kicking-off with the Kings-Seattle Kraken game at Crypto.com Arena on Thursday, October 13, the club’s second game of the season. Game time is 7:30 p.m. as the Kings conclude a two-game homestand (the Kings-Vegas Golden Knights season/home opener on Tuesday, October 11, will be broadcast on ESPN, ESPN+).

Kings programming airing on Bally Sports West, Bally Sports SoCal, and KCOP TV will stream live on the Bally Sports app and on ballysports.com when viewers authenticate through their pay-tv service. New this season, Kings games will also be available on Bally Sports+, the all-new standalone streaming subscription service from Bally Sports that gives fans a new way to watch their favorite teams. Fans can visit ballysportsplus.com to learn more and subscribe starting September 26.

This year’s broadcast schedule on KWKW 1330 AM Tu Liga Radio will be announced at a later date. The games for the second consecutive year will be available via the Tu Liga Live Stream (tuligaradio.com) simultaneously to the regular radio broadcast.