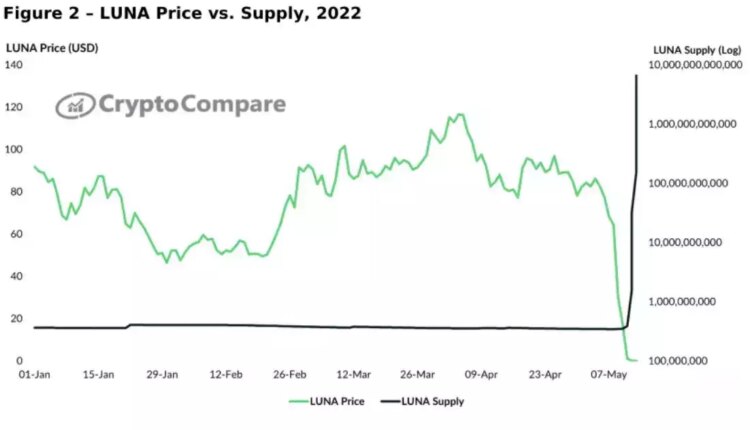 Crypto crashed this week as 2 stablecoins broke the buck. Here’s what that means, and where the market goes next.

The latest sell-off emanating from the unexpected dollar-peg losses by TerraUSD and Tether tested the confidence of investors this week — and could amplify calls for Washington to work faster on regulation, experts told Insider.

While showed signs of stabilizing above $30,000 on Friday, the crypto market saw more than $430 billion of the market’s valuation wiped out between Monday and mid-Thursday, bringing the cap to $1.12 trillion, according to CoinMarketCap data.

The price plunges of TerraUSD and its sister coin luna threw the spotlight on algorithmic stablecoins whose values are derived by a combination of computer codes and reserves to maintain a peg to a fiat currency. The market’s turbulence spread to Tether, sending the market’s third most valuable cryptocurrency briefly below its $1 peg before it regained parity.

“If there’s a complete loss of confidence with stablecoins then you can see that the market will really struggle to find footing here,” Ed Moya, senior market analyst at forex trading platform Oanda, told Insider. “ was flawed and that was seen by a lot of people. Tether is [recovering] its peg,” a move that should soothe some nerves, he said.

Bitcoin this week dropped below $27,000 for the first time since late 2020 as investors navigated the Terra-Luna collapse and Tether’s temporary slippage. Investors in the past have questioned what reserves Tether has to back up its peg.

“There were definitely some unique characteristics to this [crypto selloff],” including that took place in a broader financial market contending with decades-high inflation and a war between Russia and Ukraine, said Chris Kline, COO and co-founder of Bitcoin IRA.

“Then you add in this component of these experiments of stablecoins, and UST is a new experiment of a stablecoin that was built differently than the ones that came before it,” said Kline. “This was algorithmically done, which helps with its efficiency. The intent of it is the future of crypto and blockchain and how we use this technology overall … and it had a weakness and its weakness was exploited in one way or another,” said Kline.

As UST lost its peg, its holders tried cashing out through luna instead of selling UST in the market. That spurred more minting of luna tokens as UST was burned. CryptoCompare said more than 6 trillion new luna tokens had been minted since May 8 which diluted its price to $0.00000953.

“We do not believe there is a risk of a permanent depeg of …[Tether], but rather, fear in the has had contagion effects on the entire sector,” said CryptoCompare, a market data provider, in a note.

Luna’s market cap was $41 billion just five weeks ago and tumbled to less than $7 million this week, marking the “largest destruction of wealth in this amount of time in a single project in crypto’s history,” CryptoCompare said.

The crypto selloff caught the eye of Treasury Secretary Janet Yellen who told lawmakers losses in stablecoins don’t yet threaten financial stability but risks could rapidly rise. Fitch Ratings said this week it expects recent developments to lead to increased calls for regulation of stablecoins.

“I’ve been saying for a long time the need for regulatory clarity is crucial in order to allow the crypto market to mature,” Scott Sheridan, CEO of Tastyworks, an online brokerage platform for options traders, wrote in an email to Insider.

“If we can get some regulatory clarity that allows listed exchanges in the US to begin offering derivatives, I think the entire game changes,” he says. “More liquidity means tighter bid/ask differentials and more price stability overall.”

Meanwhile, the cryptocurrency market may need to see a sustainable upswing in stocks to start gaining traction as crypto has been heavily correlated with the Nasdaq recently. Moya at Oanda sees $30,000 acting as intraday resistance for bitcoin in the short term.

He said that the $30,000 level would be key for many institutional investors that bought in last year.

For bitcoin to test the $20,000 level in another crash would be “heartbreaking,” he added.