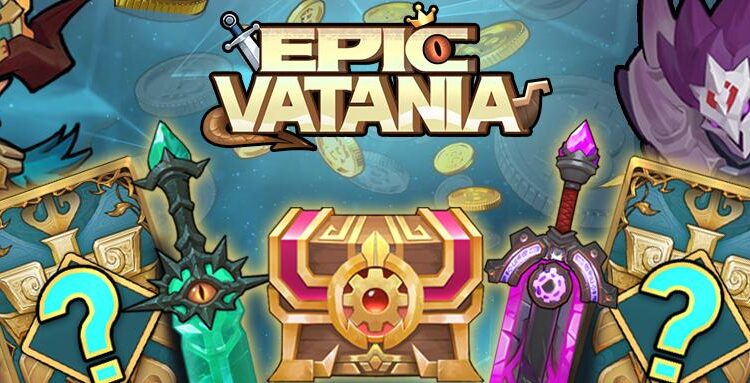 An exciting and rewarding all-new NFT game is coming. EpicVatania is a new metaverse for players and builders where they can explore and own their own virtual land.

EpicVatania, with its blockchain, is a modern all-in-one decentralized metaverse game platform. The platform is making headlines with its unique offer that allows gamers to earn rewards by just playing this thrilling game. EpicVatania promises to be another delightful proposition in the world of online gaming that continues to grow in leaps and bounds with the amalgamation of innovative ideas and technologies. By integrating DeFi with blockchain gaming, EpicVatania will propel it into a new dimension altogether.

The Team is pleased to launch this platform and offer online gamers and enthusiasts an opportunity to earn rewards based on their skills and performance. The team has put in substantial efforts in the design and development of this Metaverse, making sure the users will love this interesting game.

EpicVatania is an open-world blockchain game combined with the cinematic interactive script, epic thrilling battles, and NFT collections. The player can lead the hero team to participate in the challenging script, explore mysterious areas, slaughter powerful monsters, and even travel to numerous exotic worlds by changing the character’s skins. The game is built on the popular Blockchain technology, thus ensuring a robust and resilient technology for the Metaverse. The platform is being constructed by the world’s top game team, which includes professionals from Genshin, World of Warcraft, and RedDeadRedemption. The team consists of dozens of game developers and artists. There are more than 100 novelists from various countries who are writing the script for the game. Each script is voted, screened, translated, rated, and configured into the game.

The game has been created with the high-quality game engine UNITY, and it is both a Mobile App and a Desktop Computer App. The global multi-language version has been created concurrently, which means players can play, fight, socialize, and explore with players from all over the world at any time and from any location. That is the true Meta Universe. EpicVatania is a rapidly expanding independent team, with a majority of its players being professional gamers. EpicVatania has the ambition to develop a high-quality, innovative game.

EpicVatania incorporates several immersive components and surprise elements that keep the players engaged and hooked to the game. EpicVatania has exquisite character design, high-quality movie-effect audio and video, and an epic plot. The platform boasts unique features that give it an edge over its peers. Some of the most important features include Transparency & Immutability, Lower Fees and Security, Transaction Traceability, Ease of use, and Safety & Security.

As blockchain technology evolves and becomes more popular, NFTs are increasingly being used in multiple niches such as games, digital arts, trading in assets, etc. There are plenty of success stories about NFT collections that have multiplied in value over a very short time, which has made them a worthwhile asset class for blockchain gamers. According to industry analysts, the global market for NFTs is worth several billions of dollars. The market has undoubtedly turned heads in recent months. The opportunities in this space continue to grow with the increasing popularity of digital assets and NFT-based rewards in online games.

Led by visionary and experienced management, EpicVatania is building a complete ecosystem in the Metaverse for gamers all around the world. The platform is designed to address the needs of the growing online gaming community, and the project team has worked hard to overcome the drawbacks of other P2E platforms. The artists have drafted amazing components to make each game NFT a masterpiece.

The game has been built with a vision to harness blockchain technology and NFTs by building an integrated social and economic structure that would make it enjoyable and rewarding for gamers. EpicVatania offers more than just digital entertainment; it’s creating a decentralized player-owned economy, where members are adequately rewarded for their skills and performance in the game’s ecosystem. In their proposed roadmap which can be accessed on their site, the project team shows its commitment to the development of the EpicVatania ecosystem.

This is a platform envisioned for millions of online gamers worldwide, and EpicVatania understands the commitment it needs to be one of the best platforms that exist today. EpicVatania team will leave no stone unturned to meet the expectations of our users. There are more exciting features that will be planned to add as this game is being built. To keep pace with the ever-changing trends in this industry, more human and financial resources will be invested in research and development to make sure the users have access to the latest technology applications.

EpicVatania will empower users to own virtual assets, collect and build items to use in-game, and trade them with other players. This is a perfect opportunity for online gamers and digital art collectors to get in early and become part of this platform. The development team is dedicated to unlocking the potential of players. The team is tirelessly working on creating a game that is fair and trustworthy and that allows players to challenge the status quo. EpicVatania is poised to take the NFT gaming community by storm.

EpicVatania is currently running a whitelist competition. They are also organizing a few mega giveaways as part of their promotional offer. Players interested in taking advantage of the early-bird offer and have early access to Battle Box Pre-Sale can visit the site at:

For more information about EpicVatania, visit the website at https://epicvatania.com/

Disclaimer. This is a paid press release. Readers should do their own due diligence before taking any actions related to the promoted company or any of its affiliates or services. Cryptopolitan.com is not responsible, directly or indirectly, for any damage or loss caused or alleged to be caused by or in connection with the use of or reliance on any content, goods or services mentioned in the press release.

FTX Restricts Users to ‘Post Only’ as Cloudflare Faces Outage