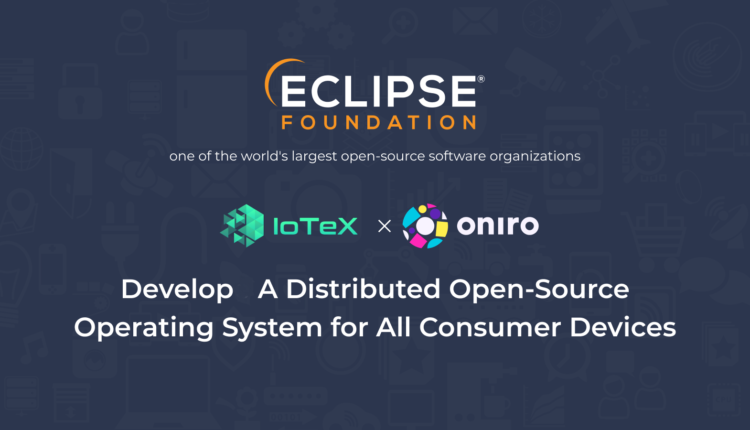 IoTeX has joined the Eclipse Foundation, one of the world’s largest open-source software organizations, and will contribute to the Oniro Project working group to develop a distributed open-source operating system for all consumer devices.

IoTeX is not only the first Layer 1 blockchain project to join the EF but also the first one which explores how to integrate Web3 components into the operating system layer of IoT devices as additional services and modules. And by contributing to the Oniro Project, it now becomes possible for IoT devices to interact with blockchains using these advanced operating system features.

“The Eclipse Foundation is thrilled to welcome IoTeX and its team of scientists, engineers, and cryptographers, and we are excited to see the Web3 open-source technology they bring to our community,” said Mike Milinkovich, executive director of the Eclipse Foundation. “We will provide a vendor-neutral governance framework within the Oniro working group for open collaboration with IoTeX.”

The EU-based Eclipse Foundation has over 300 strategic members and dozens of associate members, including IBM, Microsoft, Google, Oracle, Bosch, Siemens, Mercedes-Benz, Toyota, Volkswagen, BMW, and many others.

The Foundation provides its global community of individuals and organizations with a mature, scalable, and business-friendly environment for open-source software collaboration and innovation.

“We are extremely honored to become one of the Eclipse Foundation’s most recent members and bring a Web3 perspective to the EF that connects the physical world to the metaverse,” said IoTeX CEO and Co-Founder Raullen Chai. “Our main focus is collaborating with the foundation’s Oniro Working Group.”

Among the infinite number of consumer-facing and industrial use cases, W3bstream enables supercharging customer engagement and loyalty with intelligent devices that range from tiny sensors to carsand large home appliances.Simply put, W3bstream integration in Oniro OS turns any IoT sensor into a blockchain-enabled device, making it benefiting instantaneously from all web3 technologies such as data ownership, data monetization, automated transactions through smart contracts,  and X-to-earn models.

Bosch, for example, manufactures smart washing machines and refrigerators. This year’s global smart refrigerator market was worth just over $5.2 billion and is expected to reach nearly $7 billion by 2025, according to a Report Linker report. In the US, large, intelligent appliances such as refrigerators and washing machines are present in 13% of households, Statista reported.

Smart refrigerators have cameras and sensors that gather loads of data, namely all of their users’ consumer habits, including where and how often they shop for groceries. All that data has tremendous marketing value and could also have social and medical research applications.

With W3bstream, Bosch could quickly and inexpensively develop a Web3 application integrated into each smart refrigerator to reward users for their data which could be enough to pay back the appliance over time.

At the same time,Bosch  would also generate revenue from transactional costs derived from the users’ data sharing..

Car knows you better than you believe

Car data could already be worth more than the vehicle itself, according to a 2017 report. Mashable wrote that newer cars are similar to smartphones, only they have wheels. Many are WiFi-enabled, come with over a hundred CPUs, and have Bluetooth embedded. It knows, just like your smartphone, whether you are a churchgoer, attend AA or visit Planned Parenthood. Because of nearly 200 or so sensors throughout the vehicles, it has data points that can build a complete profile of you and your passengers.

According to a McKinsey report, car data monetization will be worth $750 billion by 2030. In 2021, there were about 230 million connected cars globally and 84 million on the roads in the United States, according to a Statista report. By 2030, that number is expected to triple to 630 million worldwide and 235 million in the United States, meaning the data of each car is worth at least $1,000 annually.

So again, what if Mercedes-Benz, Toyota, BMW, and Volkswagen, members of the Eclipse Foundation, built their Web3 dApp on W3bstream, allowing their consumers to earn at least $1,000 back each year from their cars to enhance consumer experience and loyalty. On average gaining a new customer costs five times more than holding onto a current customer. Improving customer loyalty is one of the main battles for marketing departments. Being able to offer customers rewards for their data is a powerful weapon in their customer loyalty armory.

The Canada-based Eclipse Foundation has over 300 members and dozens of associate members. It provides its global community of individuals and organizations with a mature, scalable, and business-friendly environment for open-source software collaboration and innovation.

IoTeX is an open-source platform at the intersection of blockchain and the Internet of Things. Coining its vision MachineFi, it is on a mission to enable the future decentralized machine economy. It seeks to build a connected world where machines, humans, businesses, and decentralized applications (dApps) can interact with trust and privacy. IoTeX combines blockchain, its off-chain compute infrastructure called W3bstream, and open hardware to connect billions of devices and dApps across the physical and digital world.

The Oniro Group and IoTeX are a perfect match as they are both IoT agnostic and are keen on building a global community of developers. Designed with modularity, Oniro offers more significant levels of flexibility and application portability across the broad spectrum of consumer and IoT devices — from tiny embedded sensors and actuators to feature-rich smart appliances and mobile companions.

By enabling any Oniro-powered device to interact and transact on the blockchain, IoT and  device manufacturers, OEMs and integrators, and any IoT-related project are reaching a new frontier where disruptive business models such as Sensor as a service, pay per use, data monetization are now easily accessible and implementable seamlessly.

With this membership, IoTeX expands its collaboration to new spheres as it heads into 2023. More remarkable development and growth are expected as it achieves and delivers massive technological advancements in Web3.

Disclaimer: This article is provided for informational purposes only. It is not offered or intended to be used as legal, tax, investment, financial, or other advice.