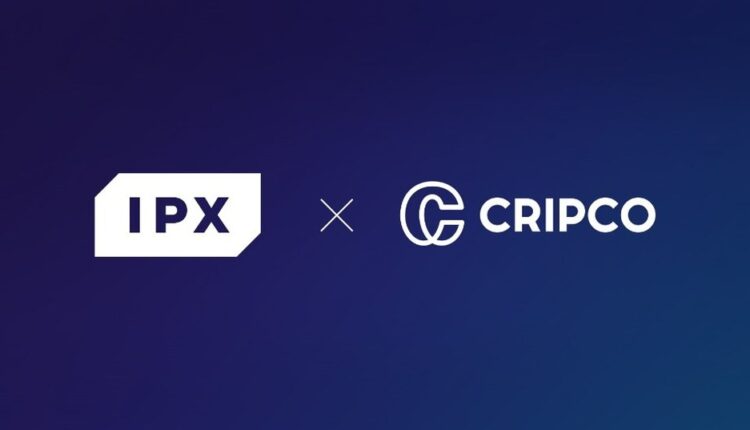 CRIPCO, a Singapore based global blockchain and NFT company, promotes the overall value and utilization of IP centered NFTs and provides a service of minting character IPs into NFTs for any holders to share and trade. On July 8th CRIPCO will list its IP3 token on FTX – the one of the fastest-growing cryptocurrency exchanges – and with its expertise will not only conduct IPX’s IP based NFT business, but also facilitate NFT business partnership with world renowned IP giants to grow its own portfolio in the NFT business.

IPX and CRIPCO will bring forward various types of NFT projects and facilitate organized relations between digital IP, DAO, and NFT market to allow anyone to own their IPs and generate revenue further establishing the vision of IP 3.0 Hub.

“IPX is excited to share our strategic partnership with CRIPCO, a company with blockchain and NFT technology expertise that has announced listing on leading global cryptocurrency exchange FTX, establishing its own unique NFT marketplace,” said IPX official. “Based on this partnership, both IPX and CRIPCO will offer a new path for IP based NFT business going forward.”

CRIPCO official concluded, “Upon listing our IP3 token on the globally famous cryptocurrency exchange FTX, CRIPCO will work alongside IPX through this partnership and with other competitive IP businesses to expand IP based NFT projects and create a new digital IP NFT business model fitting in the IP 3.0 era.”

IPX is a new corporate name of LINE FRIENDS, a global character brand that originally started from Original Characters including BROWN, CONY, SALLY created for use as stickers for the leading mobile messenger app LINE and its 200 million active users worldwide. Upon rapidly transforming its offline business to digital, the total Intellectual Property (IP) transaction reached USD 883 million in 2021, and IPX announced itself as a ‘digital IP platform’ company to enter the digital IP based metaverse and NFT business.

IPX announced its vision of IP 3.0 – allowing anyone to create, own, and generate revenue from IPs – and unveiled ‘FRENZ,’ a new IP generator platform where users can create personal character IPs for utilization in metaverse and NFT services. Through strategic partnerships with blockchain service platforms such as ‘PlayDapp,’ investments in metaverse companies, and its first NFT project, ‘OOZ & mates,’ IPX is expanding its metaverse and NFT businesses, and expertise. Moving forward, starting with virtual artist WADE, IPX will collaborate with global artists from the fashion and entertainment business in developing new influential virtual IPs, supporting NFT and digital business areas, and leading the digital IP centered metaverse generation.

CRIPCO is a Singapore-based global blockchain and NFT company that aims to popularize NFTs based on various IPs, and will list its native IP3 token on the FTX exchange on July 8, 2022. CRIPCO’s governance is based on a Decentralized Autonomous Organization (DAO), which oversees all business-critical decisions from IP screening to IP-based NFT projects. Investors and partners include FTX Ventures and SOLANA Ventures. The CRIPCO DAO is made up of corporations from various fields, renowned artists, and other influential members across industries including IPX (formerly LINE FRIENDS), NAVER Z (ZEPETO), Marciano MMG, Fujiwara Hiroshi, Edison Chen, KB (Kyubum Lee), and James Fauntleroy. In addition to attracting investment from global blockchain venture capitals and a major fashion platform, CRIPCO has secured partnerships with companies in the blockchain industry and is building its ecosystem to realize its ‘IP 3.0 Hub’ vision.

Encryptus Partners With Azadi Records to Explore NFTs and

The New Link Between Virtual and IRL NFT Experiences?

WHAT IS A BLOOD PACT?!? FANTASTIC BEASTS: CRIMES OF…